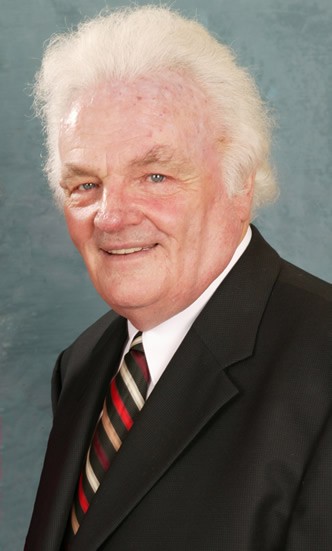 Alister John Lowe was born in Wellington, New Zealand, in 1938. He is the father of four children.

Before his conversion to Christianity in 1959, Mr Lowe was an insurance inspector.

Alister was ordained to the ministry in 1962 and took up duties in his first pastorate in Western Southland, New Zealand.

He commenced his ministry in his second pastorate in Nelson, New Zealand, in 1970. During these years he became an astute student of the Bible. His teaching ministry created demand as a convention speaker.

In 1975, Mr Lowe travelled extensively throughout the world ministering in many nations.

Alister pioneered the first A.C.E. Christian primary day school in New Zealand in his second pastorate in Nelson. Subsequently, this school became the first registered with the government.

In 1979, Alister and his family transferred to Brisbane, Australia, where he became the Associate Pastor of Christian Outreach Centre, a large evangelistic centre of 3,000 people. (The Centre has also fathered an additional 100 churches that comprise a combined membership of 10,000 people.) During his time in Brisbane, Alister became the principal of the Centre's Bible College, Christian Training Centre. Pastor Lowe was also the principal of Video Bible College, with an enrolled student body in excess of 1,000. His duties in Brisbane were completed in 1982.

Increasing demand for his ministry has resulted in the publication of several books.

He is acknowledged among his colleagues as a senior minister, with a combined function of prophet and teacher.

Alister's wife, Lois, has a dynamic ministry in her own right. She ministers encouragement and exhortation and has the ability to make Bible truths simple and easy to understand. Mrs Lowe has ministered in Ladies’ meetings and mixed groups in many countries.

Besides his teaching ministry, Alister enjoys a blessed singing ministry, an evangelistic ministry with signs following, and a prophetic mantle that is used to confirm, bless and establish believers in the Body of Christ.

Arriving in Canada in 1983, the Lowe family was based at Calgary, Alberta Alister conducted a Bible School during the week, ministering in various local churches on the weekends. They were resident in Canada for 11 months prior to moving to Louisville, Kentucky, U.S.A. Here they were based at Deeper Life Christian Centre. Alister taught in the Centre's Bible School mid-week, and ministered in the church and other local churches on the weekends. He also conducted Seminars on 'End Time Events', 'Spiritual Warfare', and 'Restoration'. They subsequently moved to California, where they were based for six months.

In July, 1986, the Lowe family returned to Brisbane, Australia, where they established a local church named Calvary Lighthouse Inc. Subsequently a sister fellowship emerged from this church, at Redcliffe.

Ron and Debbie have undertaken the pastoral role in Eagleby, where Alister and Lois function in an advisory, teaching and home fellowship capacity.

In 1992, Alister and Lois became greatly involved in missionary work. They have undertaken ministry to Fiji, India, and the nations of Malawi and Tanzania in Africa. Much of their work centers around training ministry for the church and gospel crusades.

The Lowe’s were also involved in a bimonthly ministerial fellowship.

Alister and Lois have four married children and fifteen grandchildren. They form a major component of his legacy.

The Lowes have several "sons in the gospel" in the ministry, both in New Zealand and Australia.

Many of Rev. Lowe's teachings are being uploaded to the internet. He has 111 Seminars on a variety of subjects.

With the arrival of the internet, he has gone global. A website has been established at www.lowelegacy.com Many of Alister’s teachings have been posted there. Visit the site. You will not be disappointed. It has many major divisions, together with a major work, the Feast of Trumpets, a vital teaching necessary for the church today. The antitypical application of this feast lies at the heart of God's current appointment for all Christians. Several of his books are available in hard copy. All internet materials are avaiulable FREE, and are accessible online and are fully downloadable. There is no copyright on any of his uploaded work.