“I wonder if this triangle craft is coming from an entirely

different place? Entirely different aliens? Just what is this?”

January 7, 2009 Albuquerque, New Mexico - My June 29, 1998, interview with Stein at his Florida home continues from Part 15, in which he describes in more detail an Oval Office meeting about UFOs with Vice President Richard Nixon in the fall of 1958 and the photographs shown to Nixon then, followed by a brief meeting in April 1959 with both Nixon and President Dwight Eisenhower in FBI headquarters, Washington, D. C. 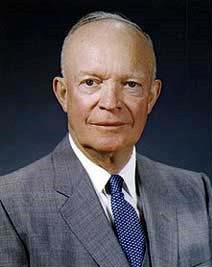 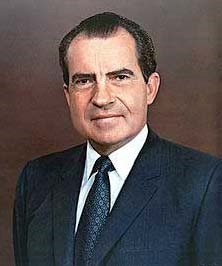 “DID NIXON MAKE ANY COMMENTS ABOUT HIS OWN CONFUSION OR FRUSTRATION ABOUT WHO EXACTLY WAS RUNNING THE AREA 51 OPERATION, ABOUT WHICH HE, AS VICE PRESIDENT, COULD NOT GET ANSWERS?

Yes. He told us he was very upset that he could not get any direct answers either. Nixon said he was passing all the information on to Ike and that it seemed like ‘we’re all on the outside looking in.’ Then he said being on the outside was not the place to be if you are the U. S. President and Vice President trying to run the show. So, Nixon was going to speak to President Eisenhower about that. I don’t know what happened, but you would assume that Ike would have pulled whoever was in charge at Area 51 into the White House for a long talk.

EVEN IF THAT HAPPENED, DID IT CHANGE ANYTHING?

Not that we knew. Of course, Anthony and I never went back to Area 51 together, so I don’t know if anything changed or not.

WHAT EXACTLY DID YOU LAY OUT ON THE SURFACE OF THE OVAL OFFICE DESK FOR NIXON TO SEE?

Different photographs such as the Italian one. We had a tape recorder with us to play back the interviews we had with the eyewitnesses. We were going to play them back to Nixon, but he said he would rather that we just tell him what was on the tape. So we talked about what was on that particular Italian tape. We had sent CIA agents to Italy to interview the man and woman, the couple.

THERE WAS A PARALLEL BETWEEN THE ITALIAN PHOTO AND THE MONTANA ANACONDA MINE PHOTO – THE SAME SORT OF DISC AND SMALL BEINGS OUTSIDE PICKING STUFF OFF THE GROUND?

Yes. The craft were not entirely identical, but they were very close and the aliens came out, picked up stuff from the ground and went back into the craft.

ITALY WAS PINE CONES. MONTANA WAS THE COPPER ORE.

WHAT OTHER PHOTOGRAPHS AND PLACES DID YOU SHOW NIXON?

We had the aerial shots from Mexico. Two or three photos.

COULD YOU SEE DETAILS?

No, too far away. Too cheap a camera. I wish I could have seen the FBI photographs before those agents left the Oval Office because they had a squadron of discs in the photos. They also had fighter planes with moving picture cameras onboard that flew right up through the squadron. The squadron is the one they said looked like German discs. I imagine the quality must have been very good.

The trouble with a lot of the sightings and photographs was that people were always taking pictures with their little Brownie Kodaks.

Yes, I showed Nixon the Belgium photo (from color 16mm film). It was a small triangular craft with lights in each of the three triangle corners.

It was in nighttime. You could basically see the whole craft faintly because of light reflection on the bottom. The triangle came over a tip of France and into Belgium before it got back to The Netherlands and then to the English Channel. The triangle craft had dipped into one little Belgium town and someone had taken a photograph at that time.

THE REPORT WAS THAT THE TRIANGLE WENT BACK TOWARD GREAT BRITAIN?

Yes. On the report with that triangle photo, they had a radar track that followed the craft right up the English Channel and on up to the North Sea area, veered over the north of Scotland and headed for the North Pole.

WAS THAT 16MM COLOR FILM? OR STILL PHOTOGRAPH?

It was color 16mm film that the eyewitness had taken, but it was at night and you could just see the lights that looked bright. The craft looked dark around the lights. You could see it was a triangular shape, but you could not see any details on the bottom.

WHO TOOK THE FILM?

Someone had just borrowed a used 16mm camera and was taking film around town and was walking back to his house when he saw the craft come toward him and over the town and filmed it.

WERE THE PHOTOS YOU SHOWED NIXON BLOWN UP FROM THE 16MM?

Yes, we showed Nixon blown up frames from the 16mm film, not the film itself.

Nixon’s only comment was, ‘I wonder if this triangle craft is coming from an entirely different place? Entirely different aliens? Just what is this?’ He was as confused as the rest of us. He didn’t know what was happening.

Right, nobody, except there could have been people at Area 51 with much more knowledge that they weren’t even reporting to the White House, you know?

Area 51 - Not Honest with President Eisenhower

BUT THERE WAS THE LIVE, GREY ALIEN AT AREA 51 THAT COULD COMMUNICATE TELEPATHICALLY AND APPARENTLY HAD BEEN THERE FOR SOME TIME. WHY WOULDN’T AMERICAN LEADERS BE GIVEN MORE INSIGHTS ABOUT WHO? WHAT? FROM WHERE?

Right, Nixon said the information he had gotten from Area 51 about the grey alien there was that the being told everyone it was from the planet with the long number and name and that they were on Earth not to do harm, but were trying to help. Nixon said the grey being gave the same answers every time it was interviewed, but nothing solid was ever confirmed. Nixon said that if the grey being got a question it didn’t like, the being would not answer, just like the grey being is the top of security for someone else! (laughs)

So, Nixon was frustrated that everyone got the same information, which was basically of very little help.

DID YOU OR ANTHONY BRING UP THE FACT THAT YOU HAD ASKED ABOUT WHETHER THE GREY BEING WAS RELATED TO DEMONS IN ANY WAY? DID YOU TALK ABOUT THAT WITH NIXON?

Not with Nixon, no. Nixon just looked at the beings as aliens that were able to operate on their own. The ‘extraterrestrial biological entity’ phrase never came out in any of those meetings. Nixon and everyone else just called them ‘aliens,’ and that was it. No one talked about specific types of aliens. Not ‘Greys,’ except the only time I ever heard the word ‘Greys’ was when Col. Jim taking us through Area 51 mentioned that the alien being we were seeing was a ‘Grey.’ That’s the only time I heard that term used.

IN BOTH MEETINGS WITH NIXON AND THE LATER SPRING MEETING WITH NIXON AND EISENHOWER, NOTHING WAS DISCUSSED ABOUT ALIEN DIFFERENCES AND AGENDAS? DID EISENHOWER ASK ABOUT THE RELATIONSHIP BETWEEN THE 6-FINGERED HUMANOIDS AND THE GREY BEINGS?

No, President Eisenhower just referred to them as different types of ‘aliens’ At that time apparently, there was no information about the 6-fingered aliens and where they were from. At least that never came up in the meetings.

I remember saying to Anthony after one of the meetings, ‘Gee, this was a wash! We didn’t accomplish a thing!’

THE BLIND LEADING THE BLIND.

Yes. I always had the feeling that whoever was in charge of Area 51 was above the normal government. The Area 51 people probably told Eisenhower and Nixon exactly what they wanted to tell them and nothing more. And as I said, even Nixon commented, ‘We’re on the outside looking in.’

BUT HOW COULD THAT HAVE OCCURRED UNLESS PRESIDENT TRUMAN SIGNED SOME KIND OF EXECUTIVE ORDER SETTING IN MOTION A GROUP THAT WAS IMMUNE FROM CONGRESSIONAL OVERSIGHT? THERE HAD TO HAVE BEEN AN EXECUTIVE ORDER TO SET UP THE AUTHORITY OVER THE ALIEN PHENOMENON.

I have a feeling that whoever was in charge of the TOP SECRET alien stuff decided what would be said or not said, including saying nothing of consequence to presidents after Truman. It seems to me that the Majestic 12 group set up by Truman has run it all by itself outside normal channels.

DID YOU HEAR EITHER NIXON OR EISENHOWER EVER USE THE TERM ‘MJ-12’ OR ‘MAJESTIC 12’? [ Twelve military, business men and scientists appointed by Truman to study the UFO phenomenon in 1947. See Majestic Documents website below.]

Nixon used the term ‘Majestic.’ He said that Majestic started this thing and were the first people who started it in the 1940s. Nixon said, ‘Getting information out of Majestic is like milking a cow that’s dry.’

IN THE FALL 1958 WHITE HOUSE MEETING?

BUT HE’S VICE PRESIDENT. DIDN’T YOU ALL TALK WITH HIM ABOUT WHY HE AND PRESIDENT EISENHOWER COULD NOT SIMPLY ORDER ALL MAJESTIC-12 INFORMATION TO BE DELIVERED TO THE AMERICAN LEADERS?

IF PRESIDENT EISENHOWER WAS FRUSTRATED AND WANTED TO GET TO THE BOTTOM OF THE ALIEN PHENOMENON, WHY COULDN’T HE ORDER EVERY SINGLE PIECE OF INFORMATION THAT MAJESTIC-12 HAD?

Well, I know that at the last spring 1959 meeting I had with them, President Eisenhower actually said, ‘We need new USAF people on this. We can’t continue in the same mode we are in. We aren’t accomplishing a thing. We don’t know anything more than we did in the late 1940s and we need new people.’

When we walked out of the Oval Office, the USAF colonel in that particular meeting said, ‘Boy, I guess I’m fired!’ (laughs)

IN EITHER THE FALL 1958 MEETING WITH NIXON ALONE, OR THE SPRING 1959 MEETING WITH EISENHOWER AND NIXON TOGETHER, DID ANYONE BRING UP THE GERMAN VRIL CRAFT?

No. In the spring meeting of 1959, that was the last meeting we had that I attended. We never went back. After that, Anthony Barden was just sending reports on what he had to CIA headquarters and they in turn were taking the reports to the White House.

In the spring 1959 meeting that only lasted about twenty-five minutes, we just showed Eisenhower and Nixon aerial views that we had. We had one over Puerto Rico that I said looked like a German craft. I said to the President and Vice President, ‘This looks like a Haunebu II German craft.’”